What is the sensitivity of onsite drug tests?

Adulterants In Drug Testing: Why You Should Be Using Them

Specimen adulteration happens when a person being tested deliberately tampers with a drug test in order to avoid a positive result. Urine tests are much easier for an applicant to attempt to alter since often times they are not able to be monitored while providing the sample. If there has been evidence of applicants attempting to skew results in the past or any suspicion of it, it is best to use an Adulterants panel on your drug test cups.

What Adulterants should I Test For?
Most drug test cups that test for adulteration test for 6 possible abnormalities that could occur within the urine, such as our 12 Panel Drug Test Cup W/6AD. Some of the panels are testing for if the sample is consistent with human urine and others for if foreign substances were added. Most tests also already have a temperature strip included on the drug test cup.

Temperature- The temperature is tested to see if it is within the correct range which is 90 °F to 100 °F. A sample may be too cold or be way too hot due to beingwas warmed up with hand warmers or a microwave.

Oxidants– Foreign chemical substances that are added to a test in order to tamper with the results. This test reveals if any of the most common oxidizing agents such as bleach, have been added to a urine sample. The affect oxidizing agents have on the urine depends on the amount added and the duration of time it has been in the urine

Specific Gravity– The measure of the density of a substance compared to the density of water. It is used to test if the sample has been diluted. In urine the SG is a measure of the concentration of solid particles that have been dissolved. Low levels of SG are indicative of a test that has apparent dilution

Ph– Is the measurement of acidity – alkalinity level of the urine. The acceptable levels of urine Ph lie in the 4.0 – 9.0 range. Anything outside of this parameter indicates the likelihood of an altered sample

Nitrite– Tests for commonly used commercial adulterants such as Klear or Whizzies. They work by oxidizing the primary Cannabinoid metabolite 11-Hydroxy-THC. Urine should have no traces of nitrite

Glutaraldehyde– Tests for the presence of an Aldehyde. Some commercial adulterants such as clear choice and Urnaid contain Aldehyde which can cause a false negative reading due to the disruption of the enzyme used in some drug screening devices

Creatinine – A waste product of Creatine, which is an amino acid found in muscle tissue and contained in urine. A person may attempt to flush their system by drinking excessive amounts of water or other diuretics such as coffee or green tea. This can result in a diluted sample. Creatinine is a way to check for the possibility of diluted urine, which is one of the most common methods people use to circumvent drug testing. The absence of Creatinine is indicative of a sample inconsistent with human urine 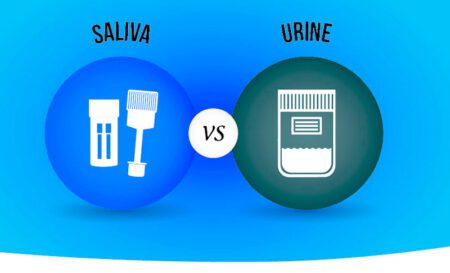 Which drug test is better? A saliva drug screening or urine drug test?

Can you test for the same types of drugs on a saliva drug screen and a urine drug test?

What is the difference between the number of panels on drug test cups? Which one is better, 6, 8, 10, or 12 panel?